Skip to content
Free shipping on all orders! All orders must reach a 60 case minimum in order to purchase.

In March, when COVID-19 closed down the schools in Kayenta, Arizona—just 25 miles from Chilchinbito, home to the first known case on the Navajo Nation—the school district enlisted its bus drivers to get meals out to its 2,000 students.

“After spring break, they delivered food for three days,” said Lemual Adson, the superintendent of Kayenta Unified Schools, in a recent phone call. “They went out Monday, Tuesday, Wednesday, and then on Thursday, the Indian Health Service called me and ordered us to stop.” The risk of contagion was just too great.

At around the same time, the community adopted a stay-at-home order and a curfew. Soon, several employees across the district began to get sick with COVID-19 and, within weeks, two of the bus drivers who had delivered the meals had passed away.

In the two months since then, the community—like many on the Navajo Nation and in Native communities impacted across the country—has essentially been shut down. Most of the small businesses people relied on to get by have closed, and cases of COVID-19 still appear to be on the rise.

Food support in the community has been a trickle, and although the district has finally resumed its meals program, that food will only go so far.

“We can’t send perishable food because there are families with no electricity [i.e., refrigeration]. And what those people do typically is buy nonperishables and few refrigerated foods and then they have to make constant runs to the store,” said Adson. In recent months, however, those runs to the store have been rare, if not impossible.

Then, last week, Superintendent Adson received a surprising call from a woman named Chenoa Bah Stilwell-Jensen, asking if Kayenta could use a shipment of shelf-stable foods.

He welcomed the idea.

The key to the food boxes Yeung is providing is a little-known California-based company called Fresh Start Natural Foods. The company produces a line of lightweight, just-add-water foods including several kinds of rice and beans, protein shakes, granola, and oatmeal.

The foods are sold in military and federal prison commissaries, where they provide a healthy alternative to instant noodles and candy bars. Unfortunately, lockdowns and relocations have made it difficult for some inmates to buy the products.

“They’re moving the sick inmates to federal medical centers and they’re moving the healthy ones to other facilities around the country,” said Fresh Start owner Sally Petersen. So, for the first time, she has had to think about alternative markets. All the ingredients are sourced in the U.S., and a number of them are organic. And because she’s sold all the food to the federal government in large quantities, Peterson has been able to keep prices low.

“I’ve been in business for 25 years, and over the last two weeks, we’ve learned of a whole new group of people that are in need of what it is that we have,” said Petersen, who was running a health food store in the Bay Area until 1993, when she discovered a gap in the institutional market that no one else was filling.

In addition to making up for lost sales, Peterson hopes to be able to meet some of the growing demand for shelf-stable food from food banks in response to the nation’s record unemployment rates. But knowing that she has just the right solution for the Navajo Nation is a great starting point.

“It makes me feel so good to be able to help them,” said Petersen, who has hired a new employee just to help get the food out to other Indigenous communities facing rising rates of infection and has taken on extra stock to meet the coming need. 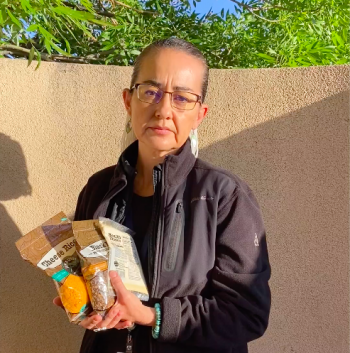 Returning to ‘Food From the Earth’

Dehydrated rice and beans may not sound revolutionary, but for Stilwell-Jensen, who spent part of her childhood with her grandparents on the Navajo Nation, it’s a step toward decolonizing Indigenous diets.

“When we heard about Fresh Start, we thought, ‘This is what our people need,’” she said, tracing the current rates of dietary illness among many Indigenous communities to government rations, forced assimilations, and the introduction of highly processed white flour. “That’s what has really caused an epidemic of diabetes in our communities,” she adds.